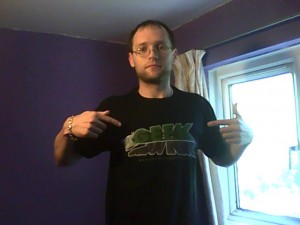 When we crowned our first ever Geek Of The Week, we had no idea it would take so long to find someone else deserving of the award.

Just as we were giving up hope, out of the blue we received an email telling us that one of our Stargate designs was incorrect, and supplying us with a web link to back up his claim.

He didn’t even want anything in return, and in fact he bought the t-shirt anyway, despite knowing it was incorrect, because he liked the design.  He just thought we should know.

Sceptically, we followed the link, to none other than Richard Dean “MacGyver” Anderson’s personal website!

He was right.  Our design wasn’t exactly what we thought it was.

And so, Paddy Jordan in Devon, UK, for out-geeking Something Geeky, (which is a rare, reward-worthy feat), we hereby dub thee our second ever Geek Of The Week!

Paddy is pictured above, in his free Limited Edition Geek Of The Week t-shirt… one of only two in existence!

Congratulations, Paddy, and thanks for setting us straight!

This entry was posted in Geek News and tagged geek, geek of the week, geeky, limited edition, macgyver, stargate, t-shirt. Bookmark the permalink.