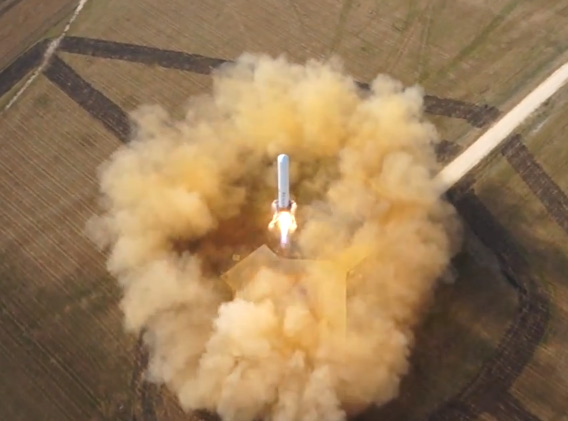 The Grasshopper has been built to test technologies that will be incorporated into the Reusable Falcon 9 and Reusable Falcon Heavy rockets, which will require vertical landings of their first-stage booster assemblies.

In this latest test, the launch vehicle flew to an altitude of 250m, hovered, performed a 100m lateral manoeuvre and then landed in the centre of the launch pad.

A press release on the SpaceX website revealed that the test “demonstrated the vehicle’s ability to perform more aggressive steering manoeuvres than have been attempted in previous flights.  Diverts like this are an important part of the trajectory in order to land the rocket precisely back at the launch site after reentering from space at hypersonic velocity.”

VTVL is the abbreviation used in rocket engineering to refer to Vertical Takeoff Vertical Landing, whereas in the aviation industry the more familiar abbreviation VTOL (Vertical Take-Off and Landing) is used to describe the same function in aircraft.

Last year, SpaceX made the headlines when it won the contract to resupply the International Space Station (ISS). The company was founded in 2002 and currently employs over 3000 people.

This test was the sixth test of the Grasshopper vehicle at the SpaceX testing facility in McGregor, Texas.